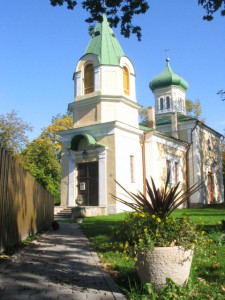 The first Holy Trinity Orthodox Church in Haapsalu was built in 1756 on the initiative of mayor J. Tobias-Enkin. The wooden church was meant to be used by the military personnel lodged in Haapsalu. The church did not have its own priest and therefore the services were held either by a priest from Paldiski or by the chaplain of the local military unit. The church was closed down in the 1830s for unknown reasons. It is possible that the church was destroyed in a fire.

Orthodox church in Haapsalu was officially registered on February 1, 1836 because a church in Tallinn which housed a military hospital closed down and its office and properties were moved to Haapsalu. As there was no church building, the services were held in a local military barrack for the next 15 years. The congregation consisted mostly of Russian aristocrats, merchants and military personnel.

In the beginning, the congregation consisted mostly of local aristocrats and military officers. The congregation increased noticeably in size in the summertime, as many guests from Russia and other places came to Haapsalu for holidays. During the new religious awakening in the last decades of the 19th century, many Estonians and people of other nationalities joined the congregation.

A burial-chapel on the Haapsalu’s old graveyard was completed in 1896 and it was consecrated in honour of St Alexander Nevsky. The chapel was transformed into an assisting church some years later. Many Russian aristocrats and cultural personalities who spent their summers in Haapsalu gave donations for the construction. A notable contributor was a businessman and owner of gold mines Aleksei Wekshin who donated icons to St Mary Magdalene’s Church and money for the building of the St Alexander Nevsky Chapel.

Before WW I a decision was made to take down St Mary Magdalene’s Church, as the church had become too small for the big congregation. Luckily, the war spoilt these plans.

There were around 500 active donating members in the congregation in the 1930s. The services were mostly held in Estonian, but on the last Sunday of each month the Church Slavonic language was used. Services in the Estonian language were held by archpriest Jakob Mutt, Church Slavonic services by priest Joann Männik. 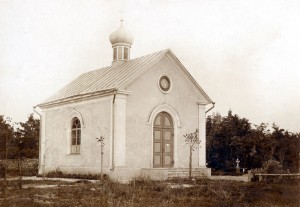 The membership of the congregation became smaller due to the Soviet power and its anti-religious propaganda, from 455 members in 1935 to approximately 100 in 1946.Until 1961, the Soviets allowed the use of both church buildings, but then the order came to close down the assisting church. The building stood empty for three years. To avoid theft in the church, the interior of the church was taken to a church in the town of Kiviõli, where it is located until today. The Soviet authorities gave an order to the congregation to move out of St Mary Magdalene’s Church in 1964.

The congregation was allowed to start using the assistant church again. A written contract was made between the congregation and the town’s authorities. The move took place from August to September 1964. As the chapel had been damaged whilst standing empty, a quick renovation of the interior was carried out and the beautiful ceiling paintings were restored.

Mary Magdalene’s church, however, shared the destiny of many other holy buildings of Estonia – the empty church was used as a warehouse. The congregation’s archive (documents, church-books etc) was destroyed at the end of the Soviet period.